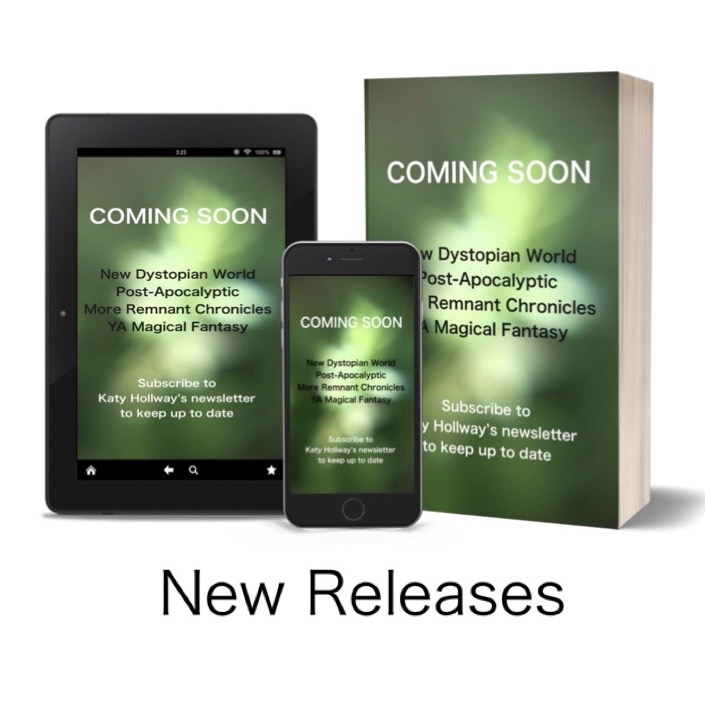 Coming soon to the collection of works by Katy Hollway very soon. A new dystopian world, a post-apocalyptic series, more Remnant Chronicles and a new YA magical fantasy.

Below are some work-in-progress blurbs...

Dystopian - "They infused lies and implanted a microchip into compliant Amber, but commanding her death flicks the switch. Fleeing with her mythical boy saviour, she unearths her identity. But she isn't the only one who knows the powerful truth. Now she is dangerously alive."

Post Apocalyptic - "Alma, separated from her parents must take her siblings in her care across the country that is crumbling around her. But it isn't just the apocalypse they are fleeing, their captors want them back."

Remnant Chronicles - A dual POV book; human and angelic. "Sanna's life has been punctuated by her power to curse those who take her into their homes. The Mistress isn't like them, but she has wrapped them up in a dangerous deal with the Wanderers. Sanna's whole world will be cursed, but she can do nothing about it."

Magical Fantasy - A dual POV series. "The magic was illegal and, quite frankly IMPOSSIBLE. But Zabrina can't change the face that she's forced her bearded examiner into a glittery dress or that he was SEEN. Her powers, his expertise and THAT child? It's as if someone else planned destroying both worlds."

"He's a defective fairy; a fact he's been keeping secret. But an illegal wish thrusts him into a glittery dress and blackmail, plus sets him up as a murder suspect. What's worse, there's now a child that knows fairies exist. To save both worlds, he must stop hiding."